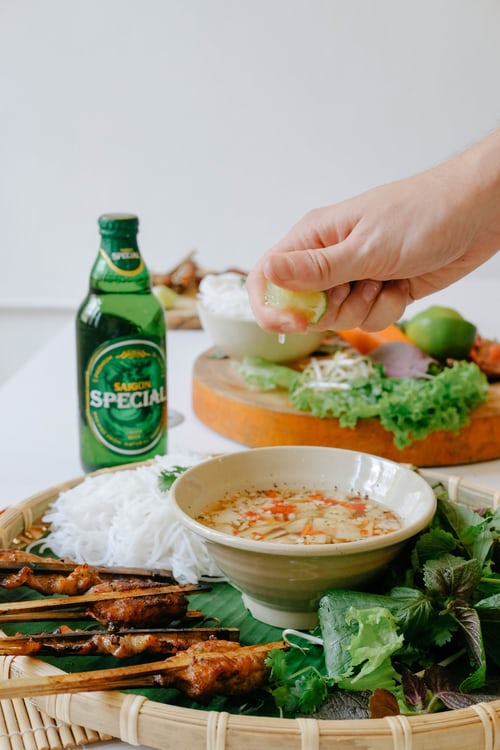 Hanoi cuisine has around 15 different types of vermicelli (1), but very first thing to mention on vermicelli is about Bun Cha (Vermicelli means Bún in Vietnamese language, and Chả means grilles-pork). Bun Cha  is one of the most popular dishes of Vietnam cuisine in general, especially for Hanoi-people; and listed as top 10 best street food on the world by National Geographic magazine.

No-one knows for how long this dish was found; the ancestor of this dish has not been recorded by the descendant; but one thing for certain: this dish appeared on every corner of street very long time ago, as well as appeared into famous literary paper.

At the very first glance, this dish does not seem a special one (2). Across Vietnam, there are numerous of  similar dishes like Hanoi Bun Cha, with almost the same texture and taste (in different name, of course) . The recipes of Bun Cha can be found  in every market in Vietnam; it’s no need tons of spice cupboard like Pho or Hue Beef noddle, or prepare many kinds of fussy thing like Bun thang/ Bun Mam (other kinds of Bun). Bun Cha is simple and cute in some way: pork belly (or pork shoulder in stead), vermicelli, garlic, dried onion, some kind of fresh herbs.The broth is the special thing of this dish, and it’s made of the most traditional Vietnamese way: dilution fish sauce, vinegar, white sugar, some piece of garlic, green papaya, kohlrabi, carrot, pepper and chili. Different vendor/restaurant has different way to make the broth and marinated the pork before grill, and there’s no right or wrong formula to make the broth or marinated sauce; so each restaurant vender has its own flavor for this dish. Pork is being grilled in front of the restaurant; the smoked and savor is attracted and fascinated the by-passer, made them look back and not want to leave…

For a truly Hanoi citizen, people use to have this dish for lunch, has became an unique feature of “culinary art” of this land. Of course, there’re many foods that served in the evening time, but eating Bun Cha in this time is still probably strange to many people.

The delicacy that bun cha of Vietnam can make foreign visitors ‘fascinated’, is the culture “just enough” in the meal. Just enough means: meat is not too lean, not too fat; enough vegetables, fish sauce not to salty and vermicelli/ lemon not to sour, so eater can complete the meal without creating any food omission. But that is enough to make the eater enjoy all the flavors without fear of being tired or too full (3)

To the story of most powerful-man on the world…

In May 2016, the US incumbent president at that time- Barack Obama and his Chief- Mr. Bourdain had dinner at a small restaurant in Le Van Huu street was really shocked the world at that time, by his simplicity. The image of a man in white shirt, drinking cold beer and eating Bun Cha in a very normal restaurant with his famous Chief has became a very impressive moment in the masses for a long time afterwards. What he wrote about the dish was: “ Cold beer, fantastic meat, cheap Bun, low plastic- chair. But just Wonderful”