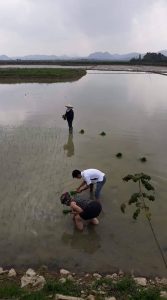 Ninh Binh, located at the south of Northern Delta, 90km away from Hanoi, known as famous destination for both domestic and local tourists, because of its diversity in cultural relics, majestic scenic spots and valuable ecological environment.

Especially in 2014, Trang An landscape complex was recognized by UNESCO as World Heritage site, the 1st mixing heritage of Vietnam as well as Southeast Asian. Trang An-which was created 250 million years ago- consists a system of limestone mountain, through a long period of weathering due to changes in Earth’s climate, sea retreated has created hundreds of valleys, lagoons and lakes. This heritage preserves and contains itself many ecosystems of wetland, forests, limestone mountains and cultural relics.

What to see in Ninh Binh

·       Trang An complex: this 6,226 ha square landscape is one of the most incredible and beautiful Karst tower landscape in the world, demonstrating on how people interact with the natural and adapt with environmental changes during for 30,000 years. The long cultural history of this land is closely linked with the geological development of limestone mountains; this was a period when citizen here experienced one of the most extreme climatic and environmental fluctuations in Earth’s history, include the constant flooding of the landscape with sea water. Throughout the landscape are forest carpet and 200m high con-shaped tower, with narrow-close hollows, surrounded by surrounded by inter-connected ridges & swamps. The combination of rocks, limestone, rivers system, jungle or even sky here creates a lively natural charming world. This is the place where culture is connected & also transformed by the wonder, mystery and grandeur

The other journey, Bich Dong is a pagoda complex, which was built in 1428 BC, consist of 3 separate pagodas: Ha (low), Trung (middle) and Thuong (top) pagoda.  This pagoda complex was built-up in 1428, near Bich Dong mountain, and the combination structure of mountain ranges, pagodas and caves, lying hidden under the old tree ranges created a mysterious beauty for of this whole complex. Mua and Fairy cave are other 2 caves we will get through on the journey schedule.

Thousand years ago, Hoa Lu was a magnificent imperial capital; this used to be the evidential of nation building & defendingmof three dynasties: Dinh, pre-Le and the beginning of Ly. With the surrounding mountainous terrain, the intertwined of Hoang Long (Golden dragon) rivers and water streams, and vast of Nho Quan & Gia Vien rice field,  Hoa Lu has become a solid natural wall, convenient in term of militaries, helping to protect the imperial capital from invaders. Today, the image of Hoa Lu ancient is no longer intact, but instead of temple complex: king Dinh and Le; each temple are about half km away, so people now often called “Hoa Lu ancient capital” as “temple of King Dinh and Le”. Those 2 monuments were built in 17th centuries, with extreme elaborate and unique stone carving art, hidden under the flamboyant foliage along the roadside. By entering the harem, tourists will see the bronze statue of king Dinh, place on a green rock.

·       Phat Diem stone church complex: this 22 ha. square complex also known as “the capital of Catholic in Vietnam”, which was built in 1825-1898, built in European neo-gothic style, and made by stone and ironwood. The word Phat Diem means “born the beauty”. The complex consists of five chapels, three grottoes, a memorial house, and the recently built pastoral center of the diocese; ponds, lakes, bell tower etc. Basic materials were transported hundred km away from to build the church; and under rudimentary working condition, thousand tons of stones, ironwood (up to 7 tons per in weight and 12m in length per column) were moved here to build up this construction. Ninh Binh province and related committees are finishing the dossiers to request UNESCO recognize Phat Diem stone church as a world cultural heritage.·        Thung Nham bird garden: in fact, this place is not only the habitat of many bird spices, a tropical rainforest, but also famous of its poetic landscape, caves and immense river system. Many bird spices, including the rarest which are named on red book of Vietnam could be found here. You could have a trip to Thung Nham at any time during year, but around fall time, when the weather starts to change to get chilly, then this is a perfect time for you to admire the flocks of birds hovering sideways in the sky and looking for prey. Early in the morning, when the bird leaving the nest for feeding and late afternoon when the return to the nests are 2 best times for tourists to admire thousands of birds flying.The word Thung Nham origins with the topographic features of this place: Thung means valley, and Nham means stone mountain here. We also recommend some interesting points around the place could: Vai Gioi (God praying- this is the place where people set up an altar to pray God to providing good weather and harvesting) cave, Hang But (fairy-man cave), Mermaid cave or 1,000 years old movement banyan tree (this tree had move 3 times around the ancient temple nearby).After the journey, tourists could have a rest in restaurant nearby the green jungle, enjoy the healthcare services or have some countryside dishes like natural fish, pork, sticky rice or Kim Son wine, release mind and body in the quiet and peaceful space of Thung Nham…  ·       Van Long swamp (or Van Long wetland nature reserve): wet-land ecosystems and the forests growth on limestone mountains are the main ecosystem here, beside other systems like rice fields, lawn, ethnic villages and more than 1,000 caves are discovered. Knowing as “the bay without waves”, people love the peace of fresh air here, clear & blue sky, clear water so we could observe the creatures swimming below. The water surface here is not embedded by the blue of the sea, but clearly shows the layers of the moss in bottom. Here is also the place where the world famous movie Kong’s Island was filmed in 2015 by studio Legendary entertainment. With a diverse ecosystem, the landscape is so beautiful; you can visit this area at any time of the year. This is the home of 22 species of plants; the fauna has 39 species, 19 families, 8 sets of mammals, of which 12 rare animals. Here is also the main habitat of the langur monkeys, one of the most famous species in the world, which are threatened with extinction globally and Vietnam is the only place where appearing this primate.

Beside dozen of dry caves were discovered and exploited as touring travel here, scientists and geologists believe that dozens of caves are undercover and waiting to be explorer. Moreover, tourists could also experience the Cuc Phuong museum, enjoy the May Bac mountain (silver cloud) at the height of 648m, Yen Quang lake or discovering the famous pre-historic caves: Nguoi Xua (ancient people) cave, Con Moong (name of an animal) cave or Trang Khuyet (Moon dew) cave (we highly recommend adventure-loving tourists to go for this tour). Those caves are residence of ancient people, and is an important archaeological site classified as national monument.