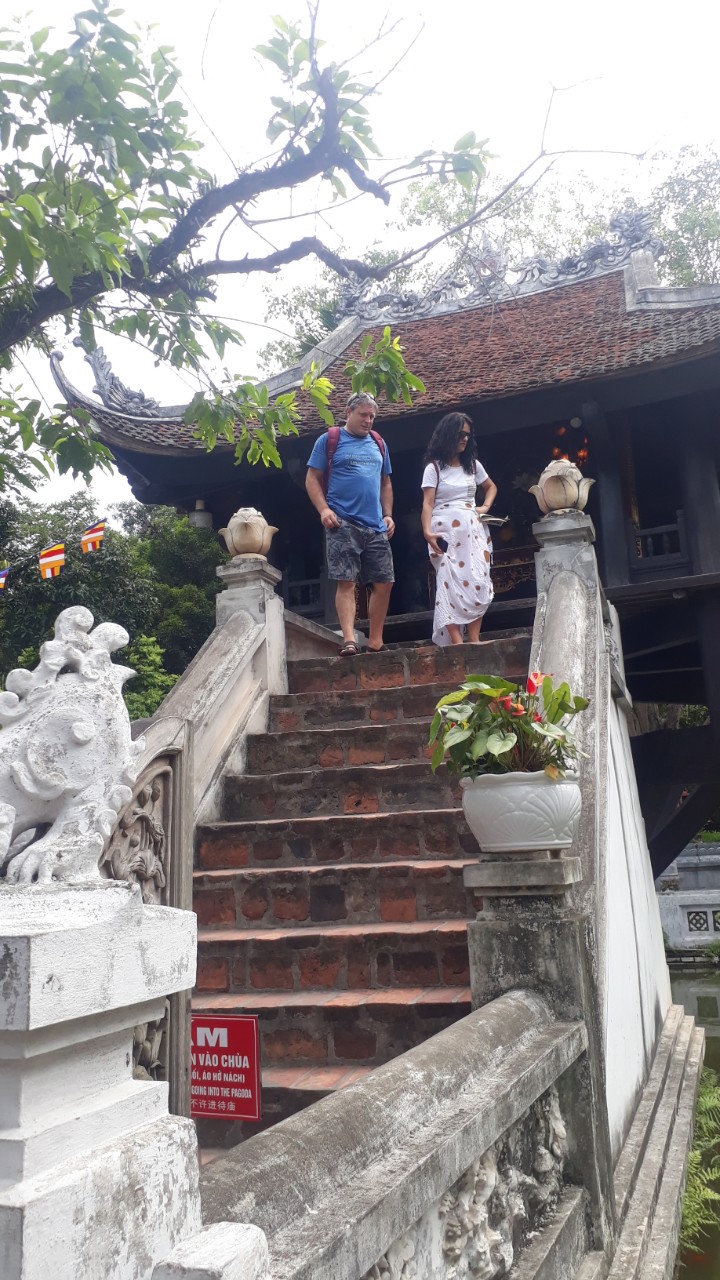 One Pillar Pagoda was built in 1049 in Dien Huu pagoda relics located by One Pillar Pagoda Street, near to Ho Chi Minh President Mausoleum, Ba Dinh District. It’s one of Viet Nam’s most beautiful and iconic temples. The temple was originally built from wood based on a single stone piller crafted to the shape of a lotus blossom. The temple has been rebuilt in 1955 when it was destroyed at the time the French left Ha Noi.

Legend has it that King Ly Thai Tong (1028 – 1054) was old but he had no son. One night, the King dreamed about Guan Yin Buddha sitting on a lotus, carying a boy and giving it to the king. Shortly after, the queen gave birth to a son. Feel thankful to Budda of his son, the king built a lotus-shaped pagoda and named it Dien Huu Pagoda.

The old pagoda was much larger than it is now; throughought dynasties, One Pillar Pagoda was rebuilt several times; each restoration, the pagoda and the surrounding landscape was changed.

From the outset, when building Dien Huu pagoda, in front of the pagoda, they built a large stone columns on the ground; on the top of the column there was a statue of Guan Yin Buddha sitting on a lotus. This architecture refered to a type of Buddhist structure, often built to practise charity. This type of architecture was famous under Tang Dynasty, spread to other Asia countries like Korea, Japan and Vietnam. Under Dinh – Le Dynasties, in our country this architecture was quite popular. Nam Viet Vuong Dinh Lien built a lot of buildings of this architecture in 973.

Dien Huu – One Pillar Pagoda was a Buddhist architecture built in western garden of the Imperial Citadel. The garden was an ancient landscape architecture, built by kings and lords for relax..

The current One Pillar Pagoda is only a part of Dien Huu Pagoda architectural complex, which was a Budhist architectural structure in front of the pagoda. Originally it was an octagonal stone pillar on the ground (the courtyard in front of the pagoda); the sides of the stone pillar were carved with Buddhist scriptures; the top of the pillar was a lotus and a statue of Guan Yin Buddha.

In 1106, it was rebuil and enlarged by King Ly Nhan Tong to become a bigger architectural complex. The Budhist architectural structure in the front yard was added with new features. The structure was built in the centre of a square pond with lotuses called Linh Chieu Pond; on top of the pillar, there was a gilded lotus calyx. In the centre of the lotus calyx, there was a purple painted structure; the slopes and roof-top of which were incorporated with deity bird icons for decoration and expelling evils. A gilded statue of Buddha was placed in the structure. The lotus pond was surrounded with painted corridors. The outside of the corriders was a moat; bridges were built on each side to enter the pagoda. In the front yard, two towers roofed with glazed tiles were built at the two sides of the overbridge.

Along with the expansion of the pagoda, King Nhan Tong started rites of “Buddha bathing” to pray for peace for the capital and the country on the first day of the month here, which later became monthly routine.

At the beginning of Tran Dynasty, in 1249, the pagoda was restored but remained the same architecture structure as in 1106.

After King Le Trung Hung’s reign, along with the decline of the garden, the pagoda gradually deteriorated. According to records of Pham Dinh Ho, Dien Huu pagoda was roofed with bamboo thatch. The lotus pond of One Pillar Pagoda was abandoned with crumbling corridors. Only a bridge with curved roof in the front and the pillar remained with a small pagoda on the top, worshiping in the Bodhisattva Avalokiteshvara.

To 1805 under King Gia Long’s reign, Thang Long Citadel was renovated, the bridge was destroyed. The architectural vestiges of the One Pillar Pagoda under the Ly Dynasty almost dissapeared.

On September 11, 1954, before the withdrawal from the capital, the French set mine to destroy the Pagoda, only the pillar with some wooden beams remained. After taking over Hanoi, the Government implemented the restoration of the pagoda as it is now.

Today, along with the Temple of Litterature, One Pillar Pagoda (restored in 1954), is commonly used as a symbol of the thousand years culture of Hanoi.

In 2012, the pagoda of nearly 1,000 years old located in the heart of the capital are restored to avoid degradation and dilapidation. The restoration completed by the 1st quarter of 2013.

One Pillar Pagoda (Dien Huu or Lien Hoa Pagoda) is a special relic, a symbol of the capital, with the long history and cultural and spiritual values. It is one of the most interesting places for tourists to visit in Ha Noi nowadays.